Lizzo To Bring The Special Tour To 3Arena Dublin Next March 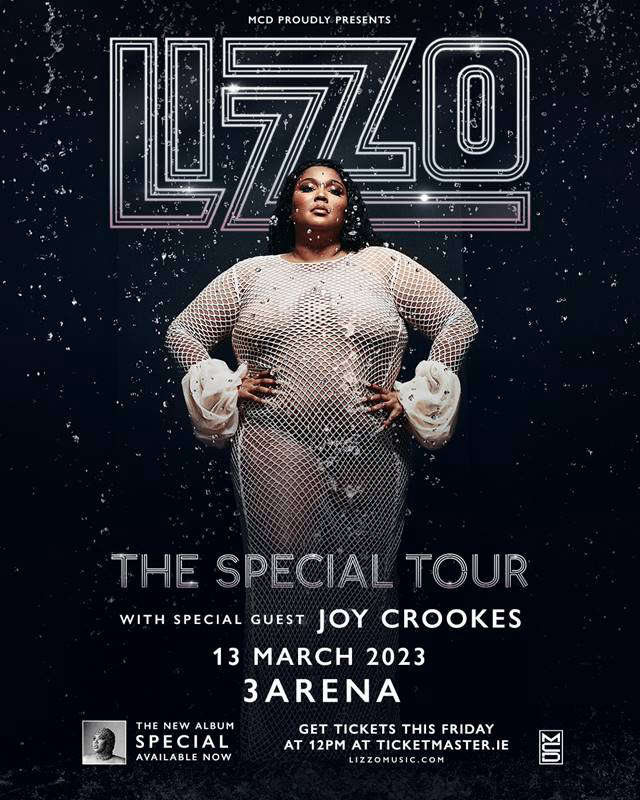 Tickets for 3Arena are priced from €60.50 including booking fee and are on sale from 12pm on Friday 7th October via Ticketmaster.ie

Under 16’s should be accompanied by an adult, and it’s recommended that u14’s purchase seated tickets

Coming off her recent win for ‘Video for Good Award’ at the 2022 VMA’s for About Damn Time, along with the same track reaching number one on the Billboard Hot 100 Chart and the top 10 in 12 other countries, she will be hitting 15 European cities following her North American leg this fall. Her most recent album Special peaked at number 2 on the US Billboard 200 chart, becoming the highest-charting album by a female artist in 2022, while its release week also became the largest week earned among all albums released by a woman this year.

Produced by Live Nation, the 15-date European leg of the tour continues through Copenhagen, Amsterdam, Paris, Milan and more before wrapping up at O2 Arena in London, UK on March 15, 2023. Full routing is available below, along with North American dates that continue tonight with a second show at Madison Square Garden in New York, NY.

Lizzo has already had a packed 2022 with a double duty hosting and performance gig on Saturday Night Live, visits to NBC’s The TODAY Show and CBS’ The Late Late Show with James Corden, an opening performance at the 2022 BET Awards, and much more. Lizzo can also currently be seen in 6x Emmy-nominated Amazon Prime Video #1 reality show, Lizzo’s Watch Out For The Big Grrrls, streaming now exclusively via Prime Video. The show’s Emmy nods include nominations in the Outstanding Competition Program, Outstanding Directing for a Reality Program, and Outstanding Casting for a Reality Program categories. Her hilarious interview on Watch What Happens Live With Andy Cohen also air tonight, Monday, July 18th, on Bravo.

Lizzo recently added “fashion entrepreneur” to her multi-hyphenate career by joining forces with parent company Fabletics, Inc. for the launch of her revolutionary new shapewear brand, YITTY. Named after her childhood moniker and based on the principles of self-love, radical inner confidence, and effortless, everyday wear, the game-changing, size-inclusive brand marks an industry first: no-shame, smile-inducing shapewear designed for all body types, with sizes ranging from size 6X to XS.