Meghan Trainor - Made You Look (Instrumental) 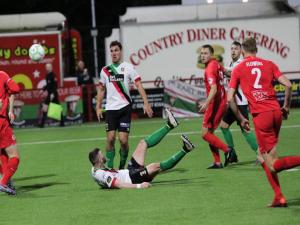 The defender hit an overhead kick seven minutes from time to clinch a dramatic 3-2 win for the visitors.

It came on a day when the new Glens hero signed a two-year contract extension to stay at the Oval until at least 2022. Off the pitch, he got news of a new arrival for his family.

The Glens came from behind to take the points at Inver - Paul O'Neill scored twice to give them a 2-1 lead at the interval.

Mark Randall and Sean Graham were on target for Larne in a pulsating, televised showdown.

Glentoran move into fourth in the table above Linfield while Larne remain seventh.

It's the second five-goal thriller between the teams this week - the Glens also won 3-2, after extra-time, in the Toals County Antrim Shield quarter-final at the Oval on Tuesday night.

🎥 New @Glentoran hero himself - Paddy McClean. Stunning overhead winner @larnefc - not long after he had an audacious long-range effort brilliantly saved. The big defender is modest too, incredible skill for his late goal but he says “it just fell for me & luckily it went in!” pic.twitter.com/ctg6tqV0Ui

5 more matches on Sat
Latest sport on air am pic.twitter.com/QTzoGgSj2c