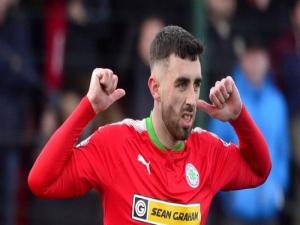 Joe Gormley - on target for Cliftonville.

Local teams went down fighting in the Europa League qualifiers on Thursday night.

Ally Roy and Ronan Hale scored for the Candystripes.

Cliftonville, Coleraine and Glenavon also made a first round exit after battling displays.

The Reds took an early lead away to Danish side Nordsjælland through a Joe Gormley penalty, but eventually lost 2-1 on the night - 3-1 on aggregate.

Coleraine went down 2-0 against Spartak Subotica at the Showgrounds, also 3-1 on aggregate.

Danske Bank Premiership champions Crusaders enter the competition next week and defender Howard Beverland has told Q Radio he's been encouraged by the performances of the other teams...

Despite outstanding displays @cliftonvillefc @ColeraineFC @derrycityfc @Glenavon_FC all out of @EuropaLeague tonight. @CrusadersFC kick off their #UEL qualifying next week. Crues defender @Howard2Bevs says all the local teams should be proud of their efforts. More on air am. pic.twitter.com/vqbvzDkkTP