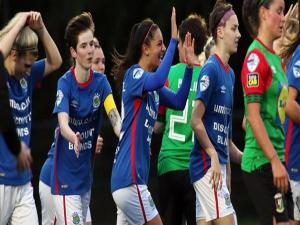 Linfield Ladies moved to the top of the Danske Bank Women’s Premiership with a convincing 3-0 victory at Glentoran on Wednesday night.

Played at the Ulidia Playing Fields due to annual maintenance work at The Oval, quickfire goals from Louise McDaniel and Casey Howe gave the Blues a two-goal advantage before the break.

Linfield are now two points clear of Glentoran at the top of the table having played a game less, winning each of their opening three matches in the competition.

Cliftonville Ladies lost ground in the title race following a 2-0 defeat at Sion Swifts thanks to two early goals in Strabane.

Aimee Mackin gave Sion the lead in the fifth minute before Tyler Toland doubled the advantage just after the midway point in the half, to move the hosts one point above the Reds.

Comber Rec Ladies and Derry City both picked up their opening point of the campaign in a scoreless encounter at Londonderry Park.

Highlights on link below, courtesy NIFL:

VIDEO | All last night's action from the @DanskeBank_UK Women's Premiership as there were wins for @LinfieldLadies and @SionSwiftsLFC whilst @ComberRecLadies and @derrycityfcw's stalemate earned each side their first point of the season. #DanskeWomensPremhttps://t.co/wC478MZa54