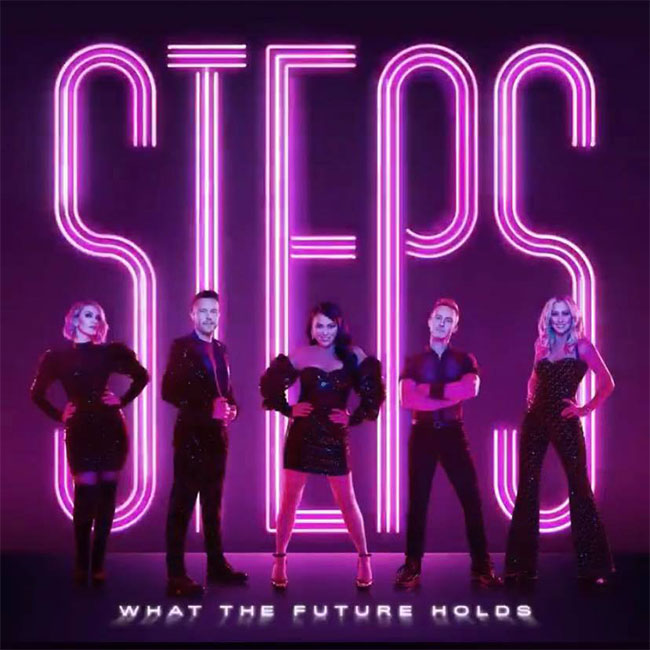 Steps have announced their first album in three years.

The group - which comprises of Claire Richards, Lee Latchford-Evans, Lisa Scott-Lee, Faye Tozer and Ian "H" Watkins - have delighted fans by confirming their new studio album, 'What The Future Holds', will be available on November 27.

Taking to their official Twitter page, they shared: "WHAT THE FUTURE HOLDS ... We couldn't keep it a secret any longer!! Our new album What The Future Holds arrives on November 27th, and it's available to pre-order from 8am tomorrow! (sic)"

The group - whose hits include 'Tragedy', 'Better The Devil You Know' and '5, 6, 7, 8' - teased a possible come back earlier on Monday (07.09.20) when they revived their official Twitter account to post individual shots of the five of them posed in front of purple flashing neon letters that spelled out S T E P S.

The short clips have been seen over 120,000 times at the time of writing, with fans eagerly sharing their excitement in the comments.

One eager fan wrote under the post on Twitter: "Omg thank you for blessing us and bringing joy to the year (sic)"

Whilst another shared: "November is set to be one AMAZING month! I'm limbering up for the dance routines already #Steps2020 (sic)"

A third wrote: "I cannot wait for this!! So excited ... I have been waiting for new music from you guys for a long time. Let's hope a tour can be done in the future Xx (sic)"

A fourth added: "hope there is a tour when it's safe to do so (sic)"

The pop group - made up of Claire Richards, Lee Latchford-Evans, Lisa Scott-Lee, Faye Tozer and Ian "H" Watkins - will release new album 'What The Future Holds' later this year, and they have revealed the story behind the title track.

Speaking to The Sun newspaper's Bizarre column, Claire said: "She wrote the track for herself but realised it wasn't really for her and gave it to us.

"It's not like it was in the bottom of a drawer somewhere. It was her who said, 'We should give this to Steps because it would really suit them.' "

There seems to be a lot of mutual respect, and Lisa admitted she has "so much admiration" for the singer, who has also written for the likes of Beyonce and Rihanna.

She added: "I am such a huge Sia fan. Her music is completely up my street, I have so much admiration for her as an artist and a songwriter so I'm in pop heaven.

"It has got back to us that she is a Steps fan and also that she has Steps on her playlists, which is great."

The new single - which is an epic dance track - was actually meant to be released as a surprise six months ago.

However, the coronavirus pandemic and lockdown meant the group had to pause their plans to let Lisa get home to Dubai, where she lives with her husband and children.

Faye explained: "It was really hard because it was literally the day after lockdown that we were going to start the whole campaign.

"We had a call from the record company in America saying, 'We need to make a choice, either it goes ahead or it doesn't'.

"It was so hard because we'd worked so hard to get this whole project together, make it sound perfect. We were really ready and suddenly it was like, 'Don't say anything!' "