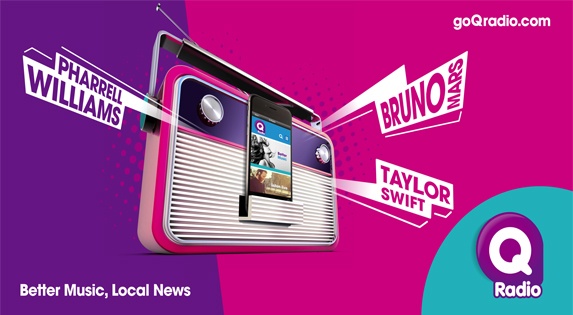 Each local commercial radio station in the UK has requirements in respect of its music and local content, such as news, speech levels etc. These requirements are set out in the station "Format", a document issued by Ofcom, the UK’s radio regulator. This Public File contains details of the elements that Ofcom regulate, such as music tracks, local news etc. It is intended to give you a better understanding of our output and what we are doing for our local community.

Q Radio broadcasts news bulletins 24 hours a day on weekdays.  These bulletins contain a full mix of local, national and world stories, along with sport, weather and entertainment news.  Local produced news is broadcast from 07.00 - 22.00 Weekdays and 09.00 - 18.00 at the weekend, bulletins containing local, national and world news these bulletins are produced and presented from our Belfast newsroom At other times bulletins are produced from our 24 hour newsroom in London via Sky News Radio (IRN)

Should you wish to contact any of the reporters in our newsroom, you can email news@goqradio.com or by telephone – Tel: 028 90 890 140

There was a burglary at a convenience store in Markethill in the early hours of Tuesday morning.

Two people broke in and stole cigarettes and alcohol.

They made off on foot.

South Down MLA Jim Wells says several family illnesses and the collapse of his political career has taken their toll.

The DUP man says he’s going to take a 2 week break from the assembly to “recharge his batteries.”

In a statement he says the last 5 months have been the most difficult of his life.

Sinéad Bradley says the same sex marriage debate mustn’t marginalize anyone.
She says she’s in favor of equality but there are concerns which have to be addressed.
She is one of three SDLP assembly candidates in South Down

Amount of local programming each day produced by station:
Q Radio programming is locally produced and presented for 24 hours each weekday and 24 hours on Saturdays and Sundays.

Ofcom Localness Guidelines and how to complain
Ofcom, the government regulator with responsibilities for local radio, has produced localness guidelines that this station adheres to. These guidelines can be read here.

In addition all local radio stations have written ‘formats’ that they must follow at all times. You can read the below:

If you have a complaint to make about this station, in the first instance you should contact Q Radio at the address below.  If you are unhappy with the response you have received, you can complain directly to the regulator, Ofcom. Their website has full details about how to do this: www.ofcom.org.uk/complain/

The ‘Q Diary’ and ‘Around The County’ features enable charities and non-profit making organizations to publicize their events. Just get in touch and tell us the details of your event, and we’ll voice it, and put it on air.
Q Diary is broadcast three times each weekday, and Around The County airs twice a day.