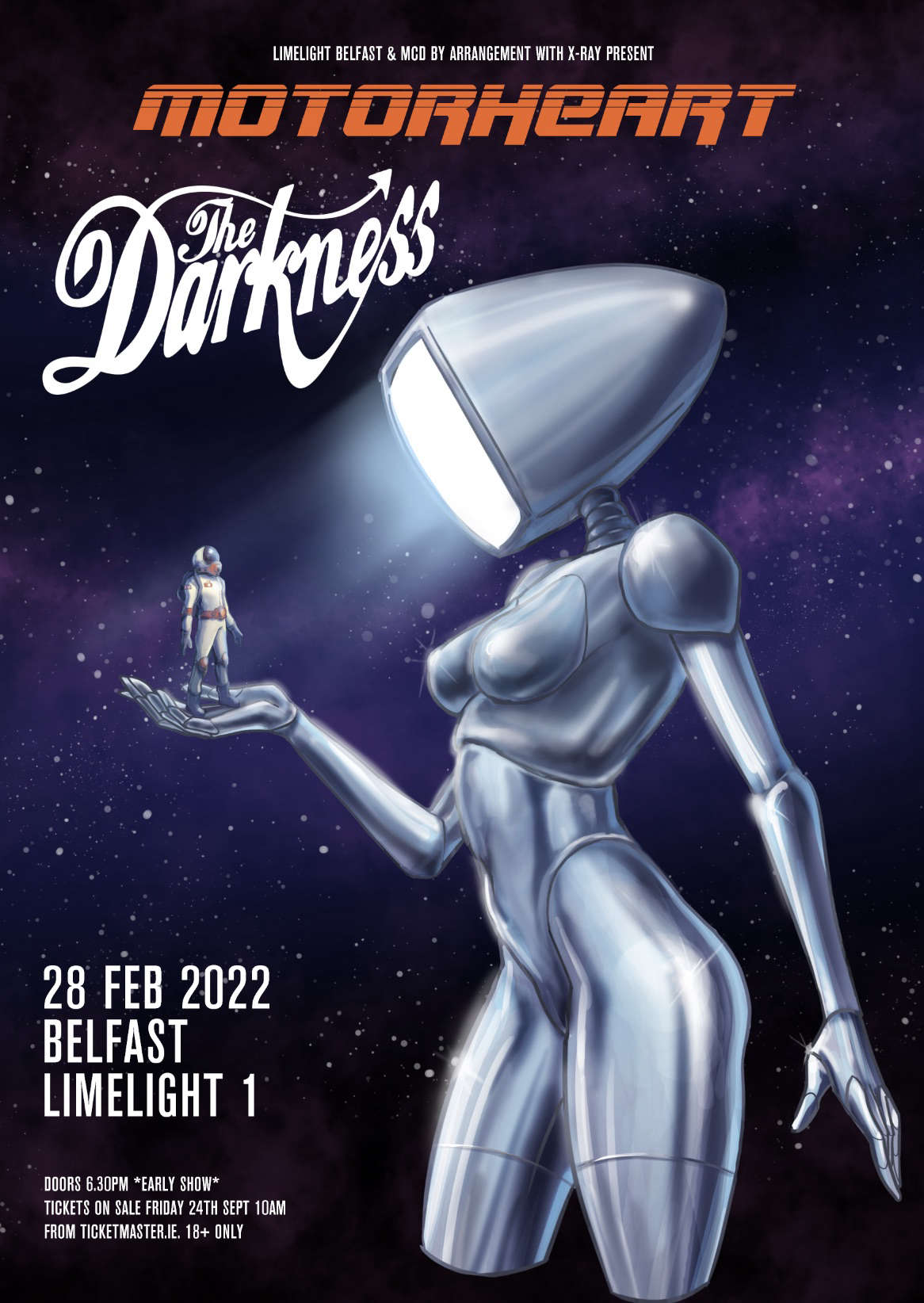 Drop the needle anywhere on Motorheart and be instantly transported from this moaning and weeping vale of tears to Elysian fields of rock where all hands are raised, the drinks – just as in the Club Tropicana of yore – are free, and everyone wears a pleasingly salacious grin. Does it rock? Is the sun hot? Has your partner’s touch grown cold? The Darkness are the Orwellian boot stamping on the flaccid face of limp rock, forever!

Brimming with their trademark blazing guitar riffs and solos, soaring falsetto and immeasurable rock ‘n’ roll extravagance, fans will get the first preview of The Darkness’ newest masterpiece when the first single is unveiled next month.

#IRELAND! The time has finally come to grace your shores again - we will be performing in #Dublin on 27th Feb & #Belfast on 28th Feb next year!

Tickets go on sale at 10am sharp this Friday 24th Sept. See you there!

To celebrate the news of Motorheart the band will be heading out on a full UK tour in November and December this year with support coming from British Lion, the up close and personal side project of legendary Iron Maiden founder and bassist Steve Harris.

Justin Hawkins comments, “The time has come, the walrus said… to put your fookin pants on your head and rock like Satan is eating your private parts with a pointy fork! Yes, we, The Darkness, are the fuck back on tour, praise Satan’s better half… come and party with us like it’s the last orders at the last chance saloon. Which it may well be, but I wouldn’t like to comment any further on that. Get in kids, it’s the Darkness, wot you knows and luvs, plus British Lion – Steve Harris’ top rock band who are guaranteed to blow your socks straight up your welcoming arses. What a night! Delirium! Outfits, including hats! Denim that smells of hamsters! Who doesn’t want that? See you down the front, connoisseurs of the finest that life has to offer…”

With a back catalogue overflowing with sonic gold and a live reputation that most bands can only dream of attaining The Darkness have established themselves as one of the most loved and important British rock bands of our time. Their latest album, 2019’s Easter Is Cancelled, became the band’s fourth Top 10 album in the UK, whilst also topping the Official Charts Top 40 Rock Chart and the iTunes Rock Chart, alongside receiving swathes of critical praise.

As The Darkness prepare for action once more, with the release of Motorheart and its accompanying live extravaganza, praise the gods of rock’n’roll that they are back to save 2021!